If ever there was a time to leave filthy tabloid journalism and in fact the entire country, it seems like now is a good one. If I was tired of defending my reputation when I lived in the UK that would be unbearable now.

Me with Dad of the Year, John Terry

I used to defend the methods of the press, especially when it came to celebrities. Anyone who works that closely with them gets to see enough hypocrisy to pretty much kill off sympathy. Such as the actress who sued a former employer of mine complaining about privacy, then used the money to pay for new boobs. Incidentally, she got the same fee for photos she posed for for a paparazzi chap, designed to look as though they were taken in a clandestine way. In fact, that reminds me of another actress who complained about us using the very photos she had been paid for in this way.

Having said all that, there is a cathartic effect to seeing people like Rupert Murdoch in the dock. All the time I was unhappily working in these snake pits, constantly dodging the knives that were aimed at my back, I felt it was my failing that I couldn’t adapt to that environment. Now it seems the general public thinks the same. Of course, the element of hypocritical outrage, so beloved of the tabloids themselves, is not lost on me. It’s like sausages – people want to eat them, but not to know where they came from. How did you think journalists were getting this information? If it wasn’t somebody’s phone being listened to, at the very least, it was a betrayal by someone they loved and trusted. Or a professional, spilling the confidential beans of medical records or criminal records. It seems lazy to say it now, but society gets the media it deserves. So it says something good about our society that people want a different kind of media.

In Brazil, the story is big, perhaps because people here like to see they haven’t got a monopoly on corruption. For this reason, Italy always seems to be in the news as well. I suppose it makes a change from the Royal Wedding.

Picture of me in my previous incarnation above. 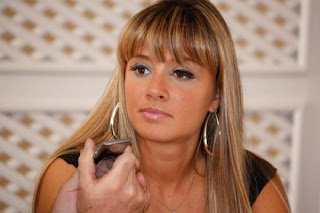 It is quite unusual to be faced with witchcraft while watching a really bad children’s TV show. In Brazil, it happens. This is JuJu, a “panicat”, from Panico na TV here in Brazil. She’s basically an attractive if slightly tranny-like woman who prances up and down in not many clothes on a show so bad, it makes me yearn for Italian tv. There used to be a show (who knows, with Berlusconi in charge, there still is) where women in lingerie kind of danced around to tacky music. It wasn’t great, but at least I could admire something pure in it. Panico na TV is one of those magazine shows with music and stuff, where the dolly birds are some kind of nonsensical add-on.

Anyway, bleary with exhaustion one day last week, I was reading a gossip item about how the other “cats” accuse this character JuJu of practising macumba on her rivals. It is a type of witchcraft which involves sacrificing animals and all sorts. I can only imagine how much more fun it would have been when I was a celebrity journalist to write this kind of thing about, say, Jordan and Kerry Katona. Wouldn’t put it past either of them, especially when you run out of things to reveal on the cover of OK! but it isn’t really a strong part of British culture.

It’s different here. Most days when I leave the house, I walk past a little bowl of sand, sometimes with black and red candles burning in it, sometimes with a dead chicken or a bottle of cachaca by its side. Since I live in a Bohemian area, I did wonder if this was some kind of contrived gesture and ignored it. But the panicats episode opened my eyes to how common this stuff is. A friend who has just got his visa to move to Australia said some friends had told him not to talk about his plans before they were concrete, in case people used “bad energy” to disrupt them. I’m a cynical type, and I’m not sure what “bad energy” really is. Is that what comes out after too many beers and an ill-advised chicken jalfrezi at midnight?* But really? Even if you believe in it, in 2011, can people really believe that such a thing has the power to change the course of events?

Other than providing more interesting celebrity gossip, I’m not sure if this type of thing has any benefits. It is kind of interesting but I saw the serious side when I was warned not to trust people too easily. The lady in question thought that opening up to others could leave you open to this kind of evil hoodoo. That can’t be good.

* I shouldn’t have said that as I dearly miss Indian food.