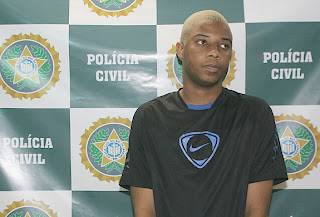 You wouldn’t expect Brazil, in 2010, to imprison people for such an Orwellian offence, but this is what has happened to five funkeiras who were found to have glorified bandidos in their songs.

Looking for some of them on youtube, the prohibited tunes do seem a bit pro-gansta, to say the least – guns in the air, lyrics about the Comando Vermelho (Red Command, who run a lot of the gangs), etc.

Here is one about the ‘Bullet Train’ which goes past Complexo do Alemao, the favela which was taken over by the army and police last month. http://www.youtube.com/watch?v=cOvYcSvJW1I&feature=related

Here’s another one, about the ‘grande familia’ of Comando Vermelho.

MC Dido, one of those arrested, said he didn’t have much choice, and it’s a powerful argument – if you live somewhere which is run by drug gangs, and the boss asks you to write a song about how great he is, who is going to refuse? Among the crimes he and his friends were accused of was inciting crime, due to songs where they appeared to encourage the setting fire of cars and robbing people that precipitated those troubles last month.

The music isn’t exactly subtle, neither are the videos with their photos of gang members, guns and people shooting each other. It still seems hard to believe that people can be imprisoned just for making music here. It will be interesting to see what happens at the trial. A protest funk party was already held last night, according to O Dia today.

Going past (not in) Guanabara Pizza in Leblon the other day, I realised I have been here nearly six months. I’ve eaten there twice, and both times had a brush with something a little terrifying.

Pizza here is extremely popular but it falls somewhat short of what Italians might refer to as pizza. It’s generally thick with cheese but no tomato base, although still addictive in its own way. Guanabara Pizza is something of an institution since it stays open until the wee small hours, although I didn’t realise this the first time I went and ended up sitting at the table with a character straight from The Godfather. I thought they had kept the restaurant open just for us.

The next time I went when a friend was visiting, and we were harrassed by an old dude who seemed quite sweet and friendly, but then wouldn’t leave us alone, tried to pay for our meal and eventually threatened my friend and had to be removed by the management. Since things come in threes, according to legend, I’m afraid to set foot in the place again.

On the second occasion, the old fella was ex-military, and it only occurred to me later on that he would have been at the peak of his career during the military dictatorship here. Since Cariocas don’t seem to be overly beloved of rules, it’s easy to forget they had one here. It’s usually cited as the reason for the realms of realms of Kafka-esque bureaucracy that swamps and suffocates everyone, but lately some friends have drawn other interesting parallels.

Some say the gun-obsessed culture derived from that time, when the army was in charge and to have a gun was to have status. An engineer student of mine pointed out that the inability to plan, even in business, comes from a time when there was such upheaval people realised there was no point in planning ahead too far and instead focused on being adaptable to the unpredictable changes they constantly had to weather. I had another, older student once who railed against the US obsession with forward planning in business, but perhaps he had cut his teeth in testier times. Without huge economic instability, forward planning is horribly possible.

It brings me to my own plans; I’m thinking of coming back for a bit and doing some qualifications in Portuguese, then heading back here. For six months, I’ve been diving forward into the vortex of Rio de Janeiro but maybe now it’s time to accept as much forward planning as I can bear. And return to England during the winter. How did this happen??

After all that, I got robbed at gunpoint yesterday reasonably close to my house. I never take documents or bank cards out with me thank god, but after a minor scuffle he got my bag with my diary, phone and all my make-up in it. I joked later on that he’s going to be the prettiest thief in the favela now, but it wasn’t that funny at the time.

When something like that happens, I’d be a liar if I didn’t say it made me feel like coming home, even with all that snow. I have to think of it as being like a tax for living here.

I’ve been mugged before in London but never with a gun. Sometimes gringoes here get mugged with fake guns, but I couldn’t take that chance. If I had run, he was on crack as far as I could tell, and he might have shot me dead. I still feel annoyed that I could have got away with my bag.

What does a crackhead want with a John Simpson book, a copy of Architecture Today and Clinique lipstick?