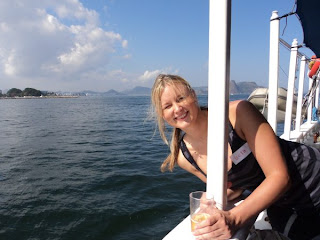 I went to look at an apartment today which is overlooking the beach here at Flamengo. The old boy who lives there only wants money to cover the apartment maintenance charges and the guy who appears to be some sort of butler. The old fella likes the odd conversation about birching petty criminals (for his pleasure or their displeasure, I’m unsure), but he’s not too bad really and away for six months of the year. Trouble is, even those charges alone amount to a fair bit. There’s a pig-headed part of me that wants it to happen and I think I’m going to try. There is a red carpet on the marble staircase for God’s sake. It’s like living in Mayfair but with a view of the ocean.

Back in the real world, expect to read reports from Zona Norte (the northern and poorer part of the city) any time soon.

It’s come to that point now that I’ve been here for seven weeks when I feel the need to assess how it’s going. My need to master Portuguese has become the most pressing issue. I can have conversations with people but I’m impatient to get beyond this point. It’s what makes the difference between being an estrangeiro and a Carioca.

Having said that, the folks who have tried to rip me off or patronise me haven’t been Cariocas at all, but other foreigners who have been here for longer. An American woman I was unfortunate enough to meet wanted me to teach her business students English for her at a price I can only describe as peanuts, while she collected the profits. She was full of useful advice such as “don’t wear havaianas” and “get yourself a therapist.” Like many bullies, she used the tactic of calling me at 10pm in a kind of attempt to catch me by surprise and terrorise me in my leisure time. I’ve saved her number as “Pimp” in my phone now and I don’t answer it.

Rio has such a strong effect on people that I think some ex-pats become possessive over their new find, and jealously guard it against others hoping for the same deliverance from mundane existences in their home countries. Young backpackers generally seem a congenial bunch, but I’ve had some of the world’s most patronising advice from other foreigners staying here. This may be a result of my decision to teach English alongside journalism, an enterprise that attracts much younger folks ripe for exploitation at times.

People are afraid of the crime in Rio so some delight in telling horror stories about people being robbed at gunpoint on Copacabana beach and the like, or even of tourists who have “disappeared” due to some entanglement or other with dodgy types. There is no doubt that you can hear gunfire frequently (it is most definitely not the jolly fireworks I assumed when I first arrived during the World Cup.) These horror merchants forget that if you’ve lived in other big cities however you’re no stranger to crime. I don’t wish to tempt fate by being flippant about it but I don’t see the point in being alarmist either.

In contrast, Brazilians are generally helpful even if there are a few sex pests. Anyway, here’s a picture of me drinking caipirinhas on a boat to prove it’s not all bad.

One thought on “Things that annoy”