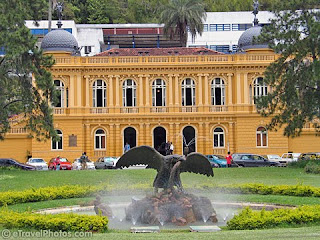 Today I went to Germany – or it felt like it. I took a bus up improbably steep roads to Petropolis in the mountains outside Rio. I have been thinking about living there, as it’s got a lot of English schools and is very picturesque. I would think twice about that in Brazil’s winter though. So far, I’ve been lucky with the weather and it was near 30 degrees on Sunday (just in time for the game).

Up that high, I thought I would escape the clouds that seem to have shrouded the city ever since, but no such luck. The clouds seemed to come into the bus station itself today, and I wore a sweatshirt for the first time.

The next story I’ve got planned involves Rocinha, billed by the tour operators as ‘Latin America’s biggest favela’, which will take in much less rarefied surroundings. This actually reminds me of a poster I saw on a train once which said: ‘Feltham: Europe’s largest young offenders’ unit’. At the time and afterwards, I wondered how this could possibly be a good thing, unless you were an out of work prison warden who had just moved to the area I guess.

Today I felt a bit like I was in an Alpine town, with its little houses with their low roofs and shutters. It reminded me of Italy or German until I spotted a palm tree or the omnipresent Brazil flag flying out of a window. The dark skies lent a diabolical aspect, but I think it would be pretty rather than forboding in summer. Now to make plans of how to get in – and out – of a favela alive. Take note, this will not be attempted alone.

P.S. once I’ve got my USB port working, there will be many more photos. At the moment, I’ve only been able to use ones others have taken.